This is a work in progress, and the contents of these articles may be edited for corrections and clarifications. 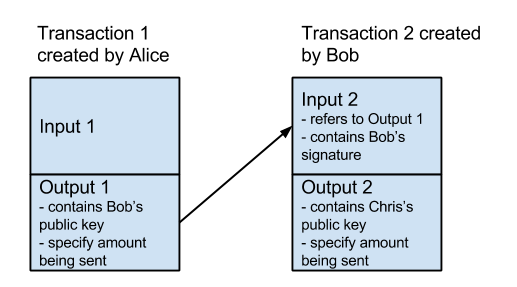 Referring to Figure B above, the input script is actually the part that “contains Bob's signature” in Input 2. The output script is the part that “contains Bob's public key” in Output 1 and also “contains Chris's public key” in Output2.  A Bitcoin node combines input script in Input 2 with the output script from Output 1 and executes it to evaluate whether the transaction is valid. A transaction is valid if and only if the top most item on the data stack is “True” when execution is complete.

The first script we will cover is the one used as Bitcoin's standard transaction. This type of transaction is the default transaction that occurs whenever you send Bitcoins to someone through any of the popular wallets like Bitcoin-Qt or Multibit, thus it is also the most common. It utilizes what developers call “Pay to Pubkey Hash”. Below is the content of the input and output script of a standard transaction.

The input script is known as the ScriptSig as it is the script containing the signature. <pubKey> is the unhashed public key and <signtaure> is a ECSDA signature derived from the private key. The output script is known as ScriptPubKey as it is the script containing the public key where the Bitcoins shall be spent.  <pubKeyHash> is the hash (SHA256 and then RIPEMD-160) of the public key, which is a Bitcoin address ( if this is confusing to you, please read the Bitcoin wiki on Bitcoin Addresses and Elliptic Curve Digital Signature Algorithm before proceeding).

So if we want a 2 of 3 multi-signature transaction, it would contain two signatures in the input script, and 3 public keys in the output script. OP_m would be OP_2 and OP_n would be OP_3. We walk through this example below.

We've now covered standard Bitcoin transactions also knows as “Pay to Pub Key Hash” and multi-signature transactions.  As you saw in both cases, the creator (or sender) of the transaction defines how the Bitcoins can be spent by defining the script in the output. The receiver of the transaction merely provides a signature in the input script. Bitcoin developers realized that this could be rather limiting when implementing more advanced financial transaction into the block chain.

The mechanism that makes this possible is to allow for a script within a script. When using “Pay to Script Hash”, the transaction creator uses the output script below. The output script contains <scriptHash> which is a hash  (SHA256 and then RIPEMD-160) of a script.

So for example, a 1 of 2 multi-signature transactions , the input script would look like below. We use this example to walk through the full "Pay To Script Hash" in Figure E.

Now it should be clear how the script within a script works to make “Pay to Script Hash” possible. Notice that there is a two step validation process. One is for validating that the <script hash> in the output matches the hash of <serialized script> in the input. The other is for validating the script contained within <serialized script>. The two step validation process is used by the Bitcoin node only in the case where the output script is recognized as a "Pay to Script Hash".


This is a work in progress, and the contents of these articles may be edited for corrections and clarifications.


The “virtual money” aspect of Bitcoin is simple to explain to the average person. However, there is a hidden and rather complex technical specification that makes Bitcoin revolutionary and more than just coins inside a computer. The technical specification that is revolutionary is the scripting language in Bitcoin.  Satoshi was a smart guy and understood that there was much more that could be done with Bitcoin beyond its use as “virtual money”. He figured out that in theory, Bitcoin's blockchain technology could be used for any kind of complex financial agreements. It could be used to handle more than just simple transactions of Bitcoins between Alice's and Bob's. It could be used to create contracts, escrow, options, derivatives, or any kind of conditional transactions that depend on input from the outside world.

A lot of the information found here can be found elsewhere such as in the Bitcoin wiki for Scripts and Transactions , but I hope to present the material in a more sequential and easy to understand manner. The currently available reading material on multi-signature transactions, and “Pay to Script Hash” is especially lacking, so these articles will try to fill that gap. You should have a basic knowledge of Bitcoin in order to fully understand these articles. At minimum, you should know the details behind how Bitcoin addresses work. The pages below are recommended prior reading materials.

2. Basics of the Scripting Language

We will start by covering the basics of what a Bitcoin transaction looks like. This is necessary in order to understand the scripting language in Bitcoin, because the scripts are contained in the transactions. In a Bitcoin transaction, there is always at least one input and one output. Most transactions will contain multiple inputs and outputs. An input describes where the Bitcoins come from and an output describes where the Bitcoins will be spent.


An input must describe where the Bitcoins come from by referring to the output of a previous transaction. This becomes obvious when you realize that any coins you want to send, must have been sent to you previously by another person. Furthermore, not only does an input need to refer to the output that it comes from, it needs to prove that the transaction creator has rights to access that specific output. This is done through a cryptographic signature derived from the private key that the transaction creator owns ( if this is confusing to you, please read the Bitcoin wiki on Bitcoin Addresses and Elliptic Curve Digital Signature Algorithm before proceeding).

Walking through a simple scenario will make this more clear. Referring to the below Figure B, we have a scenario where Bob wants to send 1 Bitcoin to Chris. Bob received 1 Bitcoin from Alice some time ago in transaction 1, and this is what he will send to Chris. Thus in Bob's transaction input, he must refer to the output in transaction 1 and also provide his signature using his private key. In his output, he will specify where the Bitcoins will be spent by using Chris's Bitcoin address. 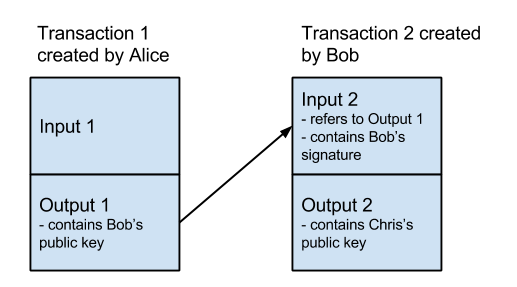 Figure B
Posted by umpeik at 12:12 PM No comments: